Not all Blackpool roofers are slaters

How we put it right

I originally priced this job it had large flat profile tiles on it and was leaking then. The customer wanted it done in slate to match the rest of the property. I tried to explain that at 11 degrees the roof was too shallow a pitch for slate and in fact tiles. I explained the extra work involved to do it correctly in slate on such a shallow pitched roof and priced accordingly. Needless to say I didn’t get the job first time around and he went for the cheaper quote to just slate it (I do think he thought I was trying to con extra work out of him)

We firstly striped the slates taking care to salvage as many as possible. We then boarded the roof adding counter battens to each roof spar to create an air gap for ventilation   we then felted the roof as you would a flat roof making it completely water tight before we even stated slating. We also at this stage added an extra course of bricks to the wall at top so the ridge tiles would sit right.

Worst slate roof ever and how we put it right

Nail holes were not covered by ridge tiles and the top of the slates was barely covered the ridge tiles themselves were a total mess
They had stretched the slates so much they hardly had any head lap there was very little if any coverage.
The battening was a disaster I couldn’t really figure out what they were trying to achieve by doubling up the battens.
They hadn’t even put a eaves slate in the bottom of the roof and when they were called back because it was leaking they just glued half slates on top of the bottom row they should go under the first row. I could go on and on and on,

In summery although I felt bad for the customer being ripped off with such a bad job I must admit I also felt a bit smug at been proven right. And at least he now has a roof that is going to last a long long time 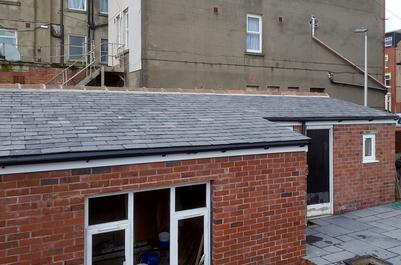 Completed slating with adequate head lap coverage as not to leak